This week we spoke to Ameeta Schmitt from Brashear High School.
Posted May 4, 2020
Author Tina Goparaju

Ameeta Schmitt is a Foreign Language teacher at Brashear High School. She has always seen herself as an advocate for the climate, even through a French accent. So, when Schmitt got involved with GBA’s Teacher Cohort last year, she began to implement Project Drawdown in her French 3 class.

She assigned her students to look for benefits to alternative modes of transportation for downtown Pittsburgh. Schmitt kickstarted the effort with the following prompt: “The mayor is offering a prize for the best idea of what mode of transportation we should use to help the most people. Come up with an idea and sell him on it.”

In French, students made posters and advertisements displaying their new ideas. In seeing the project’s success and looking to inject sustainability into the project, Schmitt began incorporating U.N. SDGs into her classroom. Soon enough, she took the initiative of becoming a leader of her local Teacher Cohort.

“When I first started, it surprised me that kids told me that they didn’t do this in any other class,” Schmitt recalls. “One student stopped me in the middle and asked me ‘Why are we doing this in French class? They don’t even do this in science class!”

This spurred a larger conversation about how climate change wasn’t a common discussion topic in school.

Through this process, Project Drawdown and the U.N. SDGs gave her something to lean on, she says, describing comfort in relying on publications and already existing research to inform her students with facts. 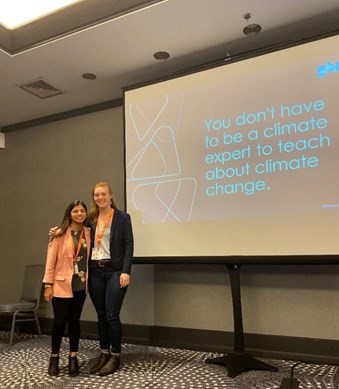 Schmitt expressed difficulty in bringing a math teacher into the Teacher Cohort because of the curriculum’s rigid format. She also found that not all educators had a partner in the same content area as them, like she does. Though this was the case, the group all had a shared understanding of how their school operated, allowing them to set reasonable and tangible goals with consideration of their school’s internal structure, such as scheduling of assemblies and SAT testing. The ease of scheduling within the same school also allowed teachers to also strike a work-life balance, satisfying needs such as management of childcare or coaching sports. Brashear High School’s own principal, formerly a science educator, has also been a huge ally of the Teacher Cohort.

How have Schmitt’s students responded? Some have crafted postcards with Good Life Goals based on the U.N. SDGs. They placed the postcards in teacher mailboxes, then urged teachers to vote on what goals would be the most reasonable for Brashear to begin to implement.

When asked if her work is sustainable, Schmitt answers yes. Her lessons can be used over again, and she and her colleagues have found that working within the Teacher Cohort provides them the time and space to do additional work.

U.N. SDG resources are available in a variety of languages. Brashear has a large population of students from all over the world, with 25 percent of students being English as a Second Language learners. “It might be more unique to my school, but the fact of the matter is that the world is changing and you’re going to see more and more students in your classrooms whose first language is not English.”

This journey has been transformative for Schmitt. Prior to the COVID-19 quarantine, Schmitt embarked on a trip to the Green Schools Conference and Expo Portland with GBA’s own, Ellen Conrad. She says that work in Portland showed her that there is a need and desire to hear about the type of work that she and her educator team are doing.

Schmitt also recognizes changes in her own students. “My students are also reading the news more and noticing concepts from class when they are presented with news articles.”