In the Spring of 2014, Mayor William Peduto and City Councilman Dan Gilman, with assistance from Green Building Alliance and Sports and Exhibition Authority (SEA) and the City’s Department of Innovation and Performance-Office of Sustainability, created a simple change to the City of Pittsburgh’s municipal garage lighting code.

This change was necessary due to a discrepancy in the existing code. The SEA and their engineer CJL Engineering discovered the conflicting language while planning a lighting retrofit at three of their garages.

(g) On and after January 1, 1985, the lighting in every part of all enclosed parking garages in which attendants do not park all vehicles shall be consistent with the standards set forth in the City of Pittsburgh Lighting Code, Title 12 Lighting Code, Chapter 1201 Lighting Code, Section 1201.07 Required Calculations for Lighting Installations, Table 7 (E) and (F) Recommended Maintained Illuminance and Luminance Values. a minimum of five (5) foot candles at all times, measured at a level of five (5) feet above the ground. The License Officer may grant an extension for compliance to this provision to any parking garage for the minimum period required to complete renovations for any parking garage which began planning renovations prior to July 1, 1984 but could not complete those renovations which include new lighting by January 1, 1985.

1: For typical conditions. While these values are intended to address personal security issues, some retailers may increase them to further offset perceived concerns. Research has shown that, under certain conditions of limited contrast (such as concrete wheel stops on a concrete garage floor), this level is needed to provide good visibility of the wheel stop.
2: Measured on a parking surface, without any shadowing effect from parked vehicles or columns. For preliminary design, and average value of 50 horizontal lux (5 hfc) for basic illuminance (and equivalent for other conditions) may be calculated.
3: The highest horizontal illuminance area, divide by the lowest horizontal illuminance point or area, should not be greater than the ratio shown.
4: Measured at 1.5 meters (5.0 ft.) above parking surface at the point of lowest horizontal illuminance, excluding facing outward along boundaries.
5: Applies to clearway ramps (no adjacent parking) but not to sloping floor designs.
6: Daylight may be considered in the design calculation
7: A high illumanance level for about the first 20 meters (66 ft.) inside the structure is needed to affect a transition from bright daylight to a lower internal level.

The Case for Greener Parking Garages

A collaboration years in the making, PGGI’s roots began in 2013 when SEA was planning to upgrade lighting in three parking garages. The agency was interested in using very high efficiency lighting but realized that there was a discrepancy in the building code that would prevent it from maximizing its efforts. With a unanimous vote to resolve the code change, just one year after completing its resulting retrofits, SEA experienced 64% reductions in annual electricity use. The payback period for the retrofit of 1,356 fixtures with accompanying motion and daylighting sensors is 3.5 years. Duquesne Light rebates helped SEA recoup 18% of its cost.

“ This is a great example of interagency cooperation and innovation – and Pittsburgh’s leadership in energy efficiency and building performance. It is a smart investment in our infrastructure that will save energy, reduce operational costs, and provide for a better customer experience. ”

In 2014, the City of Pittsburgh, with cooperation from GBA, requested PEDA support the Pittsburgh Green Garage Initiative through grant funding which would provide seed capital establishing a Lighting Infrastructure Fund and leverage both municipal and private parking operator capital investments in lighting upgrades and controls. PEDA awarded funding of nearly $470,000 which enabled the Pittsburgh Parking Authority and the Urban Redevelopment Authority to capitalize significant lighting infrastructure upgrades.

As part of the garage initiative and energy grant, URA retrofitted five local parking structures — and is extremely pleased with the results. For the first nine months of post-retrofit operations, the Authority is averaging a 57% reduction in electricity use.

URA’s complete retrofit portfolio to-date includes five parking garages with 3,051 total parking spaces lit by 1,436 new fixtures. As a result of these amazing impacts, the Authority is evaluating its entire parking garage portfolio and planning to leverage savings from its initial projects by reinvesting into other facilities via a new sustainability revolving fund. 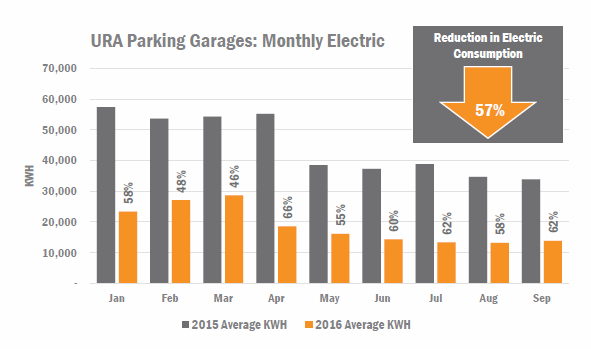 Pittsburgh Parking Authority is not far behind, completing a similar First Avenue Garage lighting and controls retrofit in August 2016 expected to have comparable jaw-dropping electricity reductions of 50% to 60%. CJL Engineering did the lighting design on all complete SEA, URA, and PPAP parking garages. PPAP is now designing similar retrofits on nine additional garages.

All 18 public parking garage projects engaged with PGGI indicate that structures of all types have opportunities to reduce their resource use in ways that may often be overlooked or underestimated. As PGGI partners continue to make energy improvements to more structures, PGGI and GBA are ensuring that efficiency opportunities for parking garages – and other oft-overlooked spaces – are brought into the light.