Birds are important to humans not just because of their beauty and cultural significance, but also because they control insect populations and help disperse seeds. One might assume that wind turbines and power lines are some of the biggest threats to birds’ safety, but studies show this is far from the truth.

Birds are important to humans not just because of their beauty and cultural significance, but also because they control insect populations and help disperse seeds. One might assume that wind turbines and power lines are some of the biggest threats to birds’ safety, but studies show this is far from the truth.

A home might cause the death of only one bird in a given year, but considering all the homes and other buildings across the U.S., bird mortality adds up! One of the only things that can kill more birds than building collisions is household or stray cats, leading to approximately three billion bird fatalities per year³. Collision deaths are easily preventable by following a few bird-friendly design guidelines.

Windows and other glass components are the building features most dangerous to birds, which have poor depth perception and can’t notice architectural context clues that humans use to avoid such collisions. Depending on the location, lighting, and time of day, glass can appear highly reflective or completely transparent, both qualities that can be dangerous to birds. Reflections on glass can make a building or window appear similar to nearby vegetation or the rest of the sky, causing birds think there is a safe place to fly. 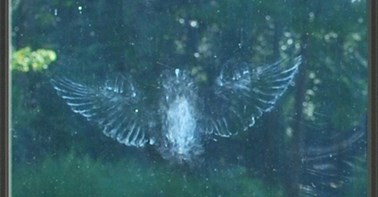 When glass looks transparent, birds may want to fly to whatever is behind it, particularly if there is indoor foliage. In addition, glass often appears transparent when it is used for railings, skywalks, or on both sides of the corner of a building. The lower levels of a building (the first 40 feet) and levels next to a green roof are places where bird-friendly design is most critical.

Another common danger to birds is nighttime lighting in and around buildings. Birds are attracted to light and can become caught in beams of light. Light pollution also confuses birds’ natural migratory patterns. If a bird is attracted to city lights at night, in the morning it will find itself in an urban setting where it has less access to food and shelter and where the previously mentioned risks of building collisions are higher.

How These Strategies Work

Bird-friendly strategies for windows deter birds by making glass more visible, making it appear as if spaces are too small to fly through, and/or by reducing reflections.

Wildlife biologists test bird-deterring windows using a dark tunnel with a window at one end. Half of the window is a pane of the glass being tested and next to it is a regular pane of clear glass. A bird placed in the tunnel will fly towards the window to try to escape and is stopped with netting before reaching the window—but allowing researchers to see which side it favors. A significant preference for clear glass indicates that birds perceive the other pane of glass as an obstacle, which is exactly what is needed for bird-friendly design.

From this sort of study, biologists have determined that most birds will only fly through horizontal spaces two inches or higher and vertical spaces four inches or wider; therefore, window patterns should have empty spaces no larger than 2” x 4” as an effective deterrent.

Especially for retrofits, the easiest way to make windows bird-friendly is to add designs or decals to window pane surfaces. These additions must be dense enough so that birds do not think they can fly through or around them. While a few loosely placed decals may slightly decrease bird collisions, they alone do not constitute bird-friendly design. Vertical stripes are the simplest pattern able to deter the large majority of birds, while covering the smallest window surface.

Another method of reducing bird collisions is to choose windows other than typical clear panes. Colored, frosted, glass-block, or stained-glass windows are more noticeable to birds. Also, a fairly new type of glass made with a UV coating or pattern that is almost invisible to humans can deter birds since they can see light in the ultraviolet range.

Design elements do not have to be added directly to window panes to be effective at preventing bird collisions. Many buildings use shutters, balconies, overhangs, grilles, or screens to reduce the amount of visible or reflective glass without interfering with the inside view.

Bird Collision Deterrence is a LEED Pilot Credit, which means it is being tested and commented on for possible inclusion in future versions of LEED.

Minimization of nighttime lighting, both indoor and outdoor, is an additional way to make buildings more bird-friendly. This can be accomplished by shading lights or angling them downward, or simply by turning them off at night. Projects that take these measures may be eligible for a LEED Sustainable Sites credit for reducing light pollution. When applicable, the credit requires shading or dimming of indoor lights at night, as well as preventing exterior lighting from projecting into the sky or too far past project boundaries.

If incorporated into the initial building design, bird-friendly techniques don’t have to cost any extra money at all! Even after that stage, they can cost as little as a few rolls of window tape (between $10-$15 from American Bird Conservancy). Window tape deteriorates over time and will need to be replaced about every four years, while most other bird-friendly design elements do not need any extra maintenance.